We're Supposed to Believe a JUNK YouTube Video Did this?

Think about this for a moment.  In countries where the majority of the people don't even have computers, supposedly they're all sitting around watching YouTube Videos disrespecting Mohammed?  Anyone who's seen this video can see that it's CLEARLY an amateur job that could have been put together by kids, yet this is the video that's causing mass rioting all over the world?
In the meantime, when Bill Maher put together a professional FULL FEATURE FILM absolutely SLAMMING Islam, nope, nothing nada!  How does this make any sense folks?    No it seems to me that these people are being purposely riled up to protest on this garbage video while the majority have not even seen it.  In the mean time, instead of our leaders condemning the Riots, the Killing and the all out chaos, INSTEAD .... they're out there "apoligizing" for this video, as if "WE THE PEOPLE" put this dammed thing together! The truth is that this is something that is being used to manipulate people.  To what end, I have no idea but even the Libyan President is saying that all of this was planned!
Posted by Juan Fermin at Monday, September 17, 2012 No comments:

Romney Can't Help Himself, He Sees a Problem He Fixes It.

On the night of July 6, 1996, 14-year-old Melissa Gay, daughter of Bain Capital executive Robert Gay, went missing in New York City, after going out without permission. Gay went to Mitt Romney, his business partner, and explained the situation.  Mitt Romney, immediately took charge and paid for his 50 employees to fly to NYC and put them all up in a Hotel to assist in the search.
"And so I said," Romney recalled when asked about the incident during a town hall meeting in March 2012, "‘Let’s close the firm, let’s close the company. Let’s all of us fly down to New York and try to find her.’ And so we closed the business, we went home and packed our things, we got a hotel near the airport where we all went to, we set up a headquarters, we met with the detectives with the New York City Police Department, we hired a private investigative firm to help guide us through this process."
Gay, Romney, and team literally fanned out on the streets of Manhattan in suits and ties, distributing 300,000 fliers and asking passersby point-blank if they had seen the missing girl. Their efforts quickly paid off in the form of a phone call from a private residence in Montville, New Jersey, where it turned out Melissa was staying, after going to an all night Rave Party without her parent's permission. She was retrieved by police and reunited with her parents in the early morning hours of July 12.
"She's OK," Robert Gay said in a statement to the Associated Press. "How can you ask for anything more than that?"

Yet people say that "Romney can't relate to people with problems"?  Just watch the video and judge for yourself.
Posted by Juan Fermin at Monday, September 17, 2012 No comments:

Here we go again guys, the Fed is up to no good, and on a Rampage printing money as fast as it can run the presses.  I guess we learned nothing from the 70's and how Inflation got out of control with excessive Government spending.  With all this money flooding the system, Food, Gas and Energy prices, which are already at an all time high are going even higher!  This action will undoubtedly Further push down American's disposable income, which in turn will cause even more job losses!  I mean let's face it, if you're having to spend $100.00 in gas just to go to the restaurant, you probably can't afford to go to that restaurant anymore right?  As Investors business Daily says, 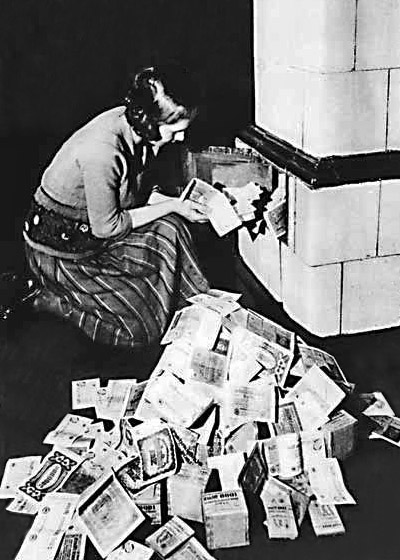 The government's addition of $1 trillion a year to our nation's debt hangs over this economy like a dark cloud, keeping entrepreneurs and big businesses alike on the sideline. The "fiscal cliff" we're about to go over will sock Americans — especially entrepreneurs — with a tax hike of almost $1 trillion. That's why the economy's dead — not insufficient Fed money printing."

But don't worry there's a bright side to all this money printing, I'm sure that within just a few years of the coming inflation, we could do like the Germans did in the 1920's and use all that extra cash as a heating source for our homes. Hey at least no one will freeze to death in the Winter of 2016!
Posted by Juan Fermin at Monday, September 17, 2012 No comments: