How The Administration Should Negotiate with Putin

By now, everyone knows how Putin has invaded the Ukraine and threatened to annex the Crimea. Poeple are saying that the U.S. response has been weak, others are saying that we need to use Military force, but I'd like to present a response that I think Reagan himself would use, if I were the head negotiator for the U.S. 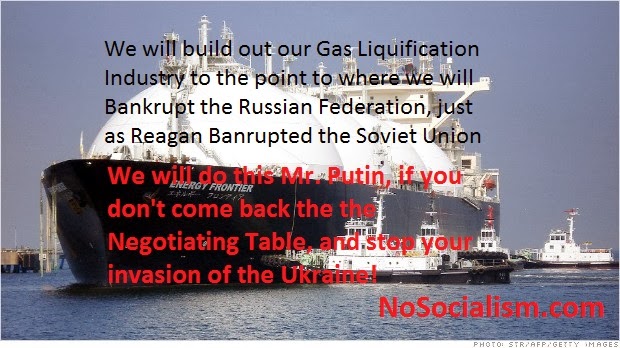 Mr. Putin, back when Bill Clinton was President, John Major headed up the UK and Boris Yeltsin was President of the Russian Federation, we all got together with the Chinese and offered Ukrainian prime minister peace and security, in order that the Ukraine to give up their sizable Nuclear arsenal along with their army.  We left them defenseless.  The world, meaning the U.S.A, promised them that their borders would not come under attack and that we would all protect them.  Additionally we even told them they would be considered for membership in the EU. Our President, Mr. Obama, reaffirmed this treaty in 2009. You Sir... Mr. Putin, are now breaking that promise, but we must keep ours.
Mr. Putin, I say to you that you have a very short memory.  In the 1980's our President, Ronald Reagan saw the weaknesses of the U.S.S.R. and came up with a plan to destroy the Republic without firing a single shot.  The Weapon of choice was Economic in nature and it's something that the U.S. has become incredibly proficient at.  If you go against us, you die.  And we don't even have to use our formidable military might to do it.  Back then, just as today you're hard currency reserves were earned by selling Oil and Natural Gas to the Europeans.  Reagan worked both with Congress to eliminate hundreds of regulations in the Oil and Gas business, along with increased rights for mining on Federal lands, along with working with the Saudi's to increase their production.  All the efforts paid off within 2 short years of Reagan being elected to office.  By 1982 oil had Collapsed to $30.00 a barrel, around half the price it was selling for in the late 70's  and by 1986, ended up trading at less than 9 bucks a barrel!  By 1991 the Soviet Union ceased to exist.  If you think we've forgotten how to wage an Economic War, we haven't and we will use all of options to force you back to the table.
Currently, 30% of all Natural Gas consumed in the EU comes from the Russian Federation, but if you continue down this path, you will force us to take drastic action.


As I'm sure you're well aware of, the U.S. currently has laws in place to where our companies can't drill off the Eastern nor Western Coasts.  We currently only allow drilling in the Gulf Coast, and tiny portions of Alaska, equal to less than 2% of the total land mass.  Fully 85% of all Federal Lands are off limits to Oil and Gas recovery, but that could change.
All we would have to do in the U.S. is to increase the available lands from 15% to 20% and it would create such a worldwide glut of Oil and Gas that the prices would collapse to pre 1987 levels!


We will give U.S. Oil and Gas producers the same preferential Tax treatment currently given to High Tech companies and Banks, cutting their effective tax rates in half.  We will stipulate that all of this comes at a cost.  They CANNOT do business with you!
Additionally, to help our EU allies, the U.S. will begin to build out Natural Gas Liquification facilities at all of our Docks around the country.  We will provide subsidies to our export companies to where they will ALWAYS beat your price for Natural Gas, and we will bankrupt you ALL OVER AGAIN, just like Reagan BANKRUPTED the old Soviet Union!  We will do a repeat of history and BANKRUPT the Russian Federation. We have the Economic Might to do it, and so help me God, we will do it. Now you pull your troops back, or your country will be reduced to a BEGGAR nation in a single decade!
Posted by Juan Fermin at Sunday, March 09, 2014 No comments: