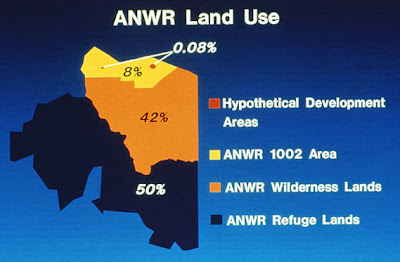 The letter also says the ruling "will significantly limit options for a pipeline" through the reserve. This pipeline has long been sought to transport oil and gas from the Chukchi Sea, the North Slope and future Arctic drilling. Mr. Salazar insists that a pipeline could still be built, but given the Obama Administration's decision to block the Keystone XL pipeline, Alaskans are right to be skeptical.
Alaskans also worry that the National Petroleum Reserve will become the same political football as the Arctic National Wildlife Reserve, or ANWR, which Washington has barred from drilling because of dubious environmental objections. The greens now want Congress to rename the energy reserve the "Western Arctic Reserve" to give the false impression that it is a fragile wildlife area. Some parts of the area are environmentally sensitive, but those 1.5 million acres (around Teshekpuk Lake) had already been set aside. Most of the other 11.5 million acres are almost indistinguishable from acreage owned by the state that is being drilled safely nearby.
The feds and Alaskan officials disagree about how much oil and natural gas is in the petroleum reserve. Some early federal estimates put the range between six and 15 billion barrels of oil, but in its latest survey the Bureau of Land Management projects closer to one billion. State officials and industry experts put the figure much higher based on the earlier surveys and improved drilling techniques.
The truth is no one knows. Prudhoe Bay turned out to be much more productive than originally believed, but surely the best strategy is to allow private drillers to risk their own money to find out. The oil and gas industry isn't in the business of drilling dry holes on purpose.
The Interior power play couldn't come at a worse time for Alaska, whose economy and government are heavily reliant on oil jobs and revenues. As recently as the 1980s, the Trans-Alaska Pipeline carried some 2.2 million barrels of oil a day from the North Slope to the port of Valdez. Yet as the once-rich fields of Prudhoe Bay and the Kuparuk River have declined, oil flow has dropped to one-third of that volume. North Dakota recently passed Alaska as the second highest oil-producing state behind Texas.
The problem isn't that Alaska is running out of oil but that federal rules are preventing the state from developing those resources. No matter what Mr. Obama says now, in a second term his great Alaska energy shutout will continue.
This story originated on WSJ
Posted by Juan Fermin at Monday, October 15, 2012