No Deal Pending on Sequestration, Because of the Opportunity it Presents 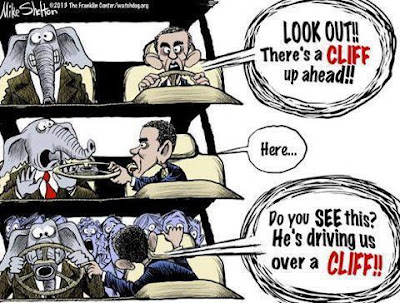 Joe Scarborough got it got it right, when he said that America won't remember the Sequester of 2013 "as some cataclysmic fiscal event", but when he goes on to say about the Republicans that "you would think its leadership would have taken to heart Mr. Obama’s warnings and struck a deal before their abysmal approval ratings sank even lower", he fails to see the point.  Obama had absolutely no intention of striking a deal.  These cuts after all, amount to a paltry 2% of PROJECTED spending (which is always a MINIMUM of 3% higher than the previous year).  As the former White House Chief of Staff to the President, Rahm Emanuel used to always say, "You never let a serious crisis go to waste".  This issue literally presents the President with yet another opportunity to slam the Republicans and get more public support for his programs, his methods, his tax increases and so on.  So what was Obama's end game?  Blow this up to an issue, even though he knew it's a non issue, then blame the Republicans!
Think about it, Joe himself reported on how the Republicans wanted to give the President control over exactly what would be cut, yet he refused?  Not only did he refuse, he actually threatened to VETO any bill that gave him that kind of authority and responsibility!  Why would he do this?  Simple, the President doesn't want ANY cuts whatsoever, no matter how small and no matter how much waste is pointed out, but more importantly he wants to have another issue to beat up the Republicans over.  The plan is to hype up the damage to the economy over the next year so the Republicans lose in the Midterm elections.  Obama ends up with Nancy Pelosi in charge of Congress again and he can go back to pushing things like his Climate Change agenda and other tax increases.